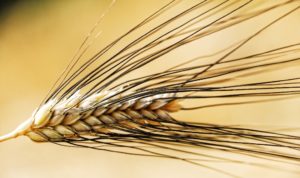 Nowadays, we often hear discourses on a wide variety of wheat, which is aggregated into one word – Ancient wheat; although, it is actually erroneous to use this term, as these varieties of wheat are taken from the 1950s but they have had a genetic improvement.
The wheat ‘Senatore Cappelli’ is an example; it is obtained from the combination of different grains with the purpose of improving the Rieti variety, created by Nazareno Strampelli. Consequently, it would be more adequate to call it traditional wheat, whose genetic characteristics derive from the environment and atmospheric conditions where they have been cultivated. Let us start by analyzing the cultivar of the durum wheat (Triticum durum) Senatore Cappelli, obtained by the geneticist Nazareno Strampelli, who, at the beginning of the twentieth century, was focused on improving the soft wheat through the crossing (hybridism) of grains coming from different global locations.
Rieti Originario was one of the first varieties, cultivated in Rieti and loved by everyone in Italy at the end of the nineteenth century; the geneticist Strampelli started studying different combinations to improve its characteristics. After many experimentations, in 1915, in the Research Centre for grain farming in Foggia, he selected one type which was suitable for pasta making, obtained from the crossing with the Tunisian variety Jeanh Rhetifah.That is how, in 1923, it was possible to create the wheat variety Senatore Cappelli, whose name is a homage to the deputy Raffaele Cappelli, who became senator and gave Strampelli the possibility to do some experimentations in a property that he owned. This wheat had a huge success, the yields went from 0.9 tons per hectare in 1920 to 1.2 tons at the end of the 30s. Currently, the production of durum wheat involves the 80% of Italy, including mainly the regions in the south and the islands, where it is also cultivated; Puglia, Sardinia, Basilicata, Lazio, Campania and the area of Asciano in Tuscany. At present the wheat Senatore Cappelli is a rarity, while a few years ago it was still a common variety.

Besides, Cappelli is one of the fewest durum wheat varieties registered to the Ense (now managed by the CRA, research institution for the grain farming) which can be cultivated by everyone, as long as it is used a certified grain. Even though, this is partially true as the society in Bologna SIS has won a competition in Foggia and they are now the only company certified to produce the durum wheat Senatore Cappelli and they will be it for the next fifteen years. Currently, the president of the SIS Mauro Tonello has shown big interest in the cultivation and growth of this variety; in fact, the purposes to enlarge the productivity of the durum wheat are clear and precise. The lands dispatched for the cultivation of the Senatore Cappelli are now five thousand hectares and before 2020 they will reach the number of thirty thousand. It is important to enhance the value of the work of many farmers who are giving to this project concreteness and virtue. Furthermore, it is essential to underline the healthy values of this variety which have been analyzed by the team of the professor Gasbarrini at the teaching polyclinic Gemelli in Rome.