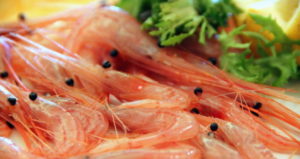 The shrimps are among the most widespread and known crustaceans, even if under this generic name are enclosed different species – the ones who live in fresh water and the ones who live in salt water. Regardless of the species, there are some characteristics that unite them; they all have ten legs, a carapace and the body divided into three parts, consisting of the head or cephalon, from the thorax or pereion and from the abdomen or pleon, some groups have then developed a single cephalothorax (cephalon + pereion), others a thoracoaddome (pereion + pleon). At the head level the crustaceans carry two pairs of antennas, one pre-oral (antennule) and one post-oral, two jaws and a lower jaw, while the abdomen carries appendices arranged in variable numbers and shape.
Different fishing techniques are used, with a prevalence of the technique of trawling – unfortunately very invasive – which often involves the capture of many other marine species, a system quite far from the concept of environmental sustainability. The other most used technique, more sensitive to the protection of the environment, is the one of the traps mainly linked to the Mediterranean shrimp fishing. Besides, the shrimps live mainly on the sandy or limped sea beds of the Mediterranean, the Atlantic and the Pacific Sea, and they also differ in the color of the carapace, different for the shrimps and little shrimps.
As for the little shrimps from the Mediterranean Sea, they are generally white or pink, except for the Veneto region where the grays are much appreciated, also called schie or sand shrimps; while regarding the shrimps, they are dark red, mainly in southern Italy or pink with a tendency to purple, in the case of varieties such as the shrimp of Sanremo. Among the shrimps of pink color is the shrimp of Crapolla of Nassa, also called Parapandalo belonging to the species Plesionika narval, which does prefer living in the water of the western Mediterranean, July is its best season and it reproduces between spring and autumn.
It is a small pink and white crustacean, with a long beak notched like a saw and with characteristic blue eggs, stored under the belly; widespread in Ustica and Filicudi, in the Argentario and in the waters of Portofino and in the Marine Nature Reserve of Punta Campanella, where the particular morphology of the seabeds faithfully reproduces the ideal habitat of this crustacean. The shrimp parapandalo is a highly gregarious animal, it does not like the light and therefore the ravines and caves of the indented coastline that comes from Punta della Campanella – of which Crapolla is part – make this area one of the richest aggregation centers of this pink crustacean.
Crapolla is distinguished by its crystal clear waters and the dark underwater caves, which makes it difficult to fish with nets, both trawl and post. Precisely for this reason, the fishermen use the traditional system of traditional pot, a cage-shaped structure, woven of rush and myrtle which has the shape of a large pumpkin and a funnel opening. It is built by fishermen entirely by hand during the winter months when the actual fishing stops, a laborious process that requires commitment and skills.
Recently recognized with the name of Crapolla of Nassa shrimp, it has become a “Slow Food Presidium” product, aimed at safeguarding the typical food from the aggressions to the mass gastronomic culture, as well as preserving this ancient fishing activity now practiced by very few fishermen of the Sorrento peninsula.
In addition to giving visibility to this small community, the establishment of the Presidium can promote the role of these small crustaceans as sentinels of the seas and help to stop the widespread maritime illegality, as well as ensuring the continuity of the species and this fishing tradition.
The shrimp of Crapolla has sweet and compact meat, it should be eaten as soon as caught, raw or sautéed, seasoned with just a drizzle of extra-virgin olive oil, as well as its blue eggs, with a delicate flavor and distinctive fresh aroma and brackish.
The Crapolla shrimp is a unique specialty and marks one of the aspects of the food identity of our South.