The charm of the wine industry of Mungibeddu

The charm of the wine industry of Mungibeddu 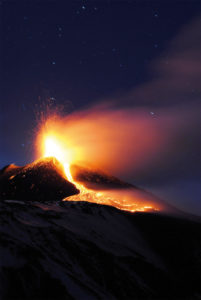 Over the past few years, the wines produced in volcanic territories have gained more interest, not only by many enthusiasts, but above all by important names from the wine industry. The summit of Etna, with its fascinating crater, is among the destinations that, for some years, has attracted great wine brands, just like Angelo Gaja who bought some vineyards together with Alberto Graci, one of the most accredited and talented winemakers in Sicily. Etna is becoming a territory of great interest, with a constant attention towards an authentic correspondence between wines and their terroir.
It is called by the Sicilian Mungibeddu or ‘d Mountain, indicative of the recognition of this impressive volcano as the Mountain par excellence, it is located 30 km from the city of Catania, on the eastern side of Sicily; it encloses an unique ecosystem. Besides, It is the most active volcano in Europe, with an urbanized area of small and medium-size centers on an altitude of 1,000 meters, while the cultivated and wooded areas reach up to 1,500 meters. This area reveals a wide geological variety and it conserves the same art of cultivating and working the vine as its origins. Through various scientific studies, it has turned out that the volcanic soils, sometimes pebbly and gravelly, sometimes sandy, assisted by important temperature variations, make the wines produced peculiar.
Even here, just like in the volcanic areas of the Vesuvius and Campi Flegrei, we find old vineyards, some ungrafted, some still in the traditional form of vine breeding in a small tree, although there is no lack of more modern spurred cordon or espalier viticulture methods.

The area of Etna Doc – recognized in 1968 as the first Sicilian DOC, besides being among the oldest in Italy – it extends from north to south-west in a band ranging from 450 to 1000 meters above the sea level and it is divided into ‘contrade’, which used to symbolize the boundaries within which, the ownership of every land was delimited. Each contrada expresses different characteristics of the same vine and they are all somehow different thanks to the unique geological and the soil and climate features that differentiate them.

The south-western slope is therefore characterized by less humidity, here the vine goes up to 1,100 meters; the eastern one (Giarre and S. Venerina) is unripe because of its exposure and it is affected by the coastal breeze; the southern slope (SM Di Licodia, Biancavilla, Paternò, Belpasso) is characterized by strong daily temperature variations and lastly the northern one (Randazzo, Castiglione, Linguaglossa) is characterized by a strong rainfall and strong temperature variations between the day and the night.
Between the 1880 and the 1885, Catania was the Sicilian province with most vineyards, cultivating over 90,000 hectares of vineyards, but the invasion of the phylloxera in the early 1900s provoked a serious viticulture crisis. The consumption of the wines produced has remained isolated for many years in the province of Catania because the farmers started cultivating more profitable products such as citrus, although over the last fifteen years there has been an important growth – according to the Istat 2017 data, the DOC Etna has reached 35 thousand hectoliters of production.

Until the early nineties of the twentieth century, there were only 15 producers who could see the real potential of this wine area, while today, the wine produced has reached a significant growth – an area of 903 hectares of vineyards and a production, according to the 2017 data 2,500,000 bottles for a total of 117 registered to the Consortium. After fifty years, this name keeps on looking to the future with great optimism, given the particularly positive historical moment.
As for the several variety, the growing area of the Carricante vine is the area of the DOC Etna, where it goes up to fairly high altitudes, sometimes even higher than those achieved by Nerello Mascalese. The name itself was chosen by the winemakers of Viagrande who named it for its high and constant productivity.

In the areas where there are steep slopes, the vineyards are cultivated according to tradition, on characteristic terraces built between dry lava stone walls, which make this unique landscape singular and fascinating.
The white DOC Etna, which requires at least 60%, is characterized by a delicate scent of white flowers and white fruit, with a savory and fresh taste with good persistence and intensity. While for the Doc Etna red or rosé, obtained with not less than 80% of Nerello Mascalese – typical vine of the Etna area that falls within the ancient group of “Nigrelli” vines as described by Sensini (1760) in his “Memoirs” on Sicilian wines “- the wines produced will have a generally delicate and complex olfactory range, with strong aromas ranging from the floral of violet and roses to red fruit, to the tertiary hints of aging, which recalls the territory of belonging.