Greece, between history and gastronomy, from the traditional flavors to the cuisine

Greece, between history and gastronomy, from the traditional flavors to the cuisine 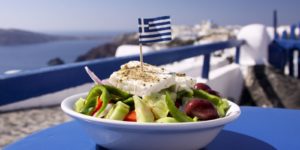 Cradle of democracy and philosophy, Greece is certainly a country that has ancient and deep roots which can be traced back to more than twenty-five centuries ago.
Precisely, it can be defined as the cradle of Western civilization, where the roots of nearly all the European culture have been created and diffused by the Roman Empire.
It is the heart of the Mediterranean Sea and it boasts a climatically strategic position, between Europe, Western Asia and North Africa, a condition that also affects gastronomy, which mainly uses genuine products such as olive oil, lamb, fish, vegetables, dried fruit and honey; also, the vineyards, should not be neglected, as they have always been sacred to Dionysus.
The Greek people are historically linked to conviviality, therefore eating is first of all an opportunity to gather around the table to talk and be together. The Greek enogastronomic tradition is rich and original and almost all the Greek authors have always written or described food, banquets and wine.
The Mycenaean Civilization developed between 1,600 and 1,200 BC in the area of ​​Mycenae, in the Peloponnese, and then it suddenly disappeared, however, laying the foundations for the culture of Classical Greece, which experienced further development phases up to the period of greatest splendor (the period of the 5th-4th century is called “classic” B.C). But it is with Pericle, from the fifth century BC, that began the golden age of the banquet and the much exalted frugality begins to no longer be followed. At the time of Alexander the Great there was a further period of great splendor and even the gastronomy resented these splendors, until the final conquest by Rome, which definitively subdued the entire nation in the first century BC. 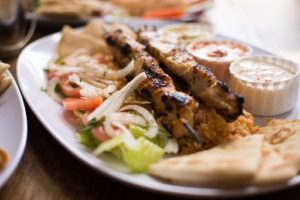 With the fall of the Roman Empire, Greece became then dominion of the Byzantines first, of the Turks, and then Venetians; dominations that left footprints in the Greek gastronomy up to today’s cuisine. In the last two decades, many chefs have started recreating the traditional Greek cuisine with which they grew up, enriched by new combinations and techniques.
Returning to the “drink of Dionysus” it is important to underline the fame that the Greek wines had in antiquity, especially the sweet ones, besides the fact that it was also thanks to the Greeks that the cult of the vine and wine was widespread in the lands and in the places where they arrived.
Despite the importance of wine in the culture of ancient Greece, its production has experienced a long period of recession in the past centuries and only in recent times – particularly in the last twenty years of the last century – it is trying to resume its steps, bringing back the wine to the past glories.