Capers from Salina, a product of ancient origin

Capers from Salina, a product of ancient origin 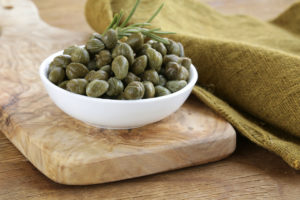 The caper is a shrub-like plant (Capparis Spinosa, evergreen shrub), which grows along the sea coasts of southern Italy and it is among the most ancient aromatic plants; in fact there are many references to its use that we find in the ancient texts of Hippocrates, Aristotle and Pliny the Elder, both as a medicine and as a food. In Italy the area where the caper is cultivated is distributed between Liguria, Puglia, Campania, for a total area of 1000 hectares, but it is on the island of Salina that the caper is a real symbol, where every year, the first Sunday of June, in the enchanting square of Sant’Onofrio in Pollara, takes place the traditional Caper Festival of Salina (ME).
The Caper from Salina, thanks to the Slow Food presidium (today in Salina there are 5 companies which belong to the Presidium and the Consortium for the protection of the Caper) has become known in the world and the request for recognition of the D.O.P. “Cap of the Aeolian Islands” (to be approved by the European Union) – identified by the entire administrative territory of the Municipality of Lipari including the islands of Lipari, Vulcano, Filicudi, Alicudi, Panarea, Stromboli and the municipalities of Santa Marina Salina, Malfa and Leni in the island of Salina, in the province of Messina – has been really appreciated.
Undoubtedly the capers are also produced in the other Aeolian Islands, but in addition to being different from island to island, they are also produced in numerically inferior quantities; the entire production of the six islands reaches even less than a tenth of that of Salina.
Also with regard to the varieties of caper plants, it should be noted that in the Aeolian Islands there are two different plants, both of the botanical species Capparis spinosa, the subspecies spinosa and subspecies inermis, which include the varieties Nocellara or Tondino, Nocella and Spinoso di Salina, which is different from this cultivar of Salina, with 8 leaves, more compact and characterized by greater crunchiness on the palate.
The caper in Salina is an integral part of the landscape and it has been the driving force behind the economy of the island, even before the increase in tourism, so much so that their production is sold even before being harvested. Unfortunately, in recent years the production of capers in Salina has decreased considerably, from a thousand quintals to 400 or slightly more current, not only due to the labor problem, from high costs given the impossibility of mechanizing the cultivation operations, but also for climate change and consequently new plant diseases, in addition to the overwhelming entry into the market of North African products. In fact, if the capers were first harvested from the beginning of April to September, they are no longer found at the end of July.
It is therefore not a question of a spontaneous caper, but of a cultivated plant, the production of which is progressive; every day new buds are formed (the bud is just the part that we consume as “caper”) and every 10 days we collect it and if it is not collected, after the tenth day we would have the opening of the bud with the consequent flowering of caper which, once faded, would leave room for the cucuncio (gynaeceum, which contains the seeds).
The processing methods have been inherited from previous generations, who used to plant the new cuttings to better support the production, but always in full respect of the traditional agricultural landscape.
It is also important to underline the total absence of treatments with pesticides or synthetic chemical fertilizers, a guarantee of absolute wholesomeness of the product.
The harvest takes place exclusively by hand, in the coolest hours of the day from 4.30 up to 10.30 am and after 5.30 pm, ideal hours to avoid the heat. Once collected, they are laid out to dry on jute sheets, in the cool, to prevent them from blossoming; they cannot be consumed as soon as they are collected because they contain very bitter substances. It is very important to give them time to get rid of all the accumulated heat, to lose temperature and only after salting, alternating a layer of capers with a layer of coarse sea salt) which usually occurs in stems (cugniettu) or in tinedde. For the first 15 days, the capers must be “cured”, ie decanted from one tinedda to another, to prevent the combined action of salt and heat, trigger fermentations making them rot.
As soon as it is clear that the caper is cooked in salt and bright green becomes dark, it is placed in larger bowls, this phase of salting lasts from one to three months, after which the Capers of Salina are ready for consumption. The plant therefore consumes both the buds, called capers, and the fruits, known as cucunci, both are preserved in salt, but can also be found in oil or vinegar. Those in salt are always desalted under a trickle of running water for a few minutes and then squeezed well; those of Salina are characterized by compactness, fragrance and uniformity. Ingredient of great personality, it is used in the kitchen in different preparations to give character and aroma to the dish, particularly suitable for flavoring pasta dishes and fish, as well as in the traditional Sicilian Aubergine Sauce.