Spain, a strategic crossroads between cultures and gastronomy

Spain, a strategic crossroads between cultures and gastronomy

The gastronomic history of Spain is rather complex, given its geographical position and the fact that it has been a destination for trade and food from Africa, Asia and especially America. These influences and this complexity have undoubtedly influenced the gastronomic culture of the country, leading it to grow and to innovate, without losing its deep and primordial roots.
Going into the details of the historical evolution, the Roman influence greatly influenced the Spanish cuisine, conforming it to those of the other Mediterranean territories, even though the arrival of the Arabs and of the Jews also left a strong imprint.
Spain is characterized by different regions, not only from the cultural, social and climatic point of view but also from the gastronomic one, like the South area, which is very influenced by the long Arab domination.
Precisely, the cuisine of the regions on the coast is characterized by the abundance of fish products, while the cuisine of the north finds its specificity in cheeses, while the inland areas have recipes based mainly on legumes and meats.
It is probably the country with the cuisine really similar to the Italian one, made of a poor gastronomy of peasant origin, which respects what the land has to offer and on occasion it transforms it into rich dishes.
Great importance is given to the cultivation of the vine and the olive tree, as well as the use of garlic, different spices and hot peppers; also the pig has great importance, from this animal are obtained many sausages, as well as it is used for different preparations. First of all the serrano jamon but you can also get different products, such as chorizo ​​(spicy red salami), morcilla (blood sausage and boiled meat), sobresada (minced meat with chilli and fat of the animal) and many other delicacies.
The desserts deserve a special mention: they strictly follow the calendar of the seasons and they are linked to the Arab influences through the use of dried fruit, honey and pine nuts. 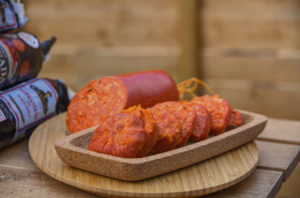 Regarding the gastronomic evolution of this country, it is important to remember the first written publication, the “Lybre de doctrina Pera ben Servir: de Tallar y del Art de Coch” or Lo Llibre de Coch “, dating back to 1520, by Ruberto de Nola, first appeared in Catalan and only in 1525 with the Castilian edition – published in Toledo – entitled “Libro de guisados, manjares y potajes, titled book de cozina”. A book that contains 242 recipes with accompanying recommendations and instructions on table service and, which after numerous editions, was transformed in the year 1599 in the cookery book by Diego Granado entitled “Arte de Cocina”.
Following a succession of so many dominations and changes, starting from the 80s, thanks to the continuous process of modernization especially in areas such as Catalonia and the Basque Country – Spain stands out among the countries where innovation and creativity are the main points for new culinary horizons.