The Atlantic bluefin tuna of the Mediterranean Sea

The Atlantic bluefin tuna of the Mediterranean Sea: purchased often, yet there is a limited knowledge of it 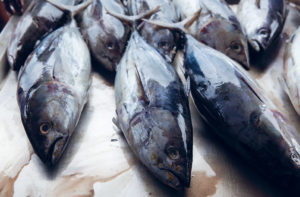 The tuna belongs to the tribe Thunnini and the class of the Perciforms, they are distributed throughout different geographical areas of the Mediterranean Sea between Europe, Asia and Africa, and its tribe is divided into tuna and little tunny. Among the tuna living in the Mediterranean Sea are the Albacore and the Red Tuna varieties, while, among the tuna living in the ocean are the Yellowfin tuna, the Atlantic bluefin tuna and the big tuna; instead, the little tunny, the atlantic bonito, and the striped little tuna belong to the little tunny class. The fishing seasons vary, every species is fished in a different period of the year : in May/June it is practiced the fishing of Albacore and little tunny of a bigger size, and the Mediterranean Red Tuna with the technique of the trawl line and the surrounding net, while in autumn the frigate tuna and little tunny are fished, instead from late September to late December there is a fishing ban for the Albacore which resumes in January. In late autumn and winter, instead, you can catch Red and little tunny (and Albacore after the ban, from January).
However, among the various types of tuna, the one that rises more interest and has more demand on the international market is the Mediterranean bluefin tuna (Thunnus thynnus or Bluefin tuna), so called for the intense dark red color of its meat. Regarding its dimensions, it can reach a length of 3 meters and weigh up to 600 kg and it is distinguished by its semi-lunar tail. It is recognized as the most valuable species, besides it is one of the most controlled, therefore really rare and expensive.
Overfishing caused, seven years ago, the risk of extinction and the orange stamp for the tuna, therefore it was necessary to use protective measures and in that matter the European community has regulated the fishing, first closing and then reopening the fishing and auctioning the shares. Those shares are distributed in this way: 70% to the commercial fishers that use the surrounding net (Almadraba), 30% to the longline fishing method. There are other shares, called accidental which are allocated to accidental capture and they are given every year to a member state of the CE (these are shares below 1%).
The quantities fished in the Mediterranean Sea have obtained great importance. The increase in the production has influenced the livestock which have shown a considerable development, especially following the constant and high Japanese demand. In fact, the product is, mainly, sold and processed in Japan, since it is one of the basic ingredients of their traditional cuisine, like the one based on raw fish, which sometimes involves indiscriminate fishing campaigns conducted both in the Mediterranean and at the entrance of the Strait of Gibraltar. Due to the strong Japanese demand during the last decade, the risk of extinction of these species, in the seas around the world, has greatly increased, with considerable impacts on biodiversity (Sardaro et al., 2016), therefore, it is rising the interest on an international scale to regulate the fishing and the aquaculture. In this regard, the regulations(EU) 2016/1627 of the European Parliament and of the Council of the 14th of September 2016 related to a multi-annual recovery plan for bluefin tuna in the Eastern Atlantic and the Mediterranean, have introduced restrictions on fishing activity in certain areas and precise periods and the adoption of regulations on sport and recreational fishing. An additional element that affects this species is the climate; in fact, according to the new analyzes and studies released today by the FAO, it emerges that by 2050 the changes of the atmospheric conditions will alter the productivity of many marine and freshwater fisheries activities.
“The production potential of fishing in the exclusive marine economic zones (EEZ) – those 200-mile bands of marine land adjacent to the coasts – that every coastal nation has the right to use- could decrease to less than 12%, but this covers up significant fluctuations of the production potential on a regional level, the models suggest. “

The challenge of the climate change can however be faced, according to the FAO; its new report shows how to do it effectively, minimizing impacts and maximizing opportunities.
Also, regarding the production and processing systems of the Mediterranean bluefin tuna, it is necessary to deepen, systematize and make the various methodologies more clear; from the most traditional and artisanal one, which involves the boiling to the one used by the industries that involves the steaming. The process of steaming retains many of the sensory properties, while the process of boiling in pot keeps many healthy properties of the fish and it leaves the tuna soft, moist and does not dry it.