The cherry tomato from Corbara, a precious ruby

The cherry tomato from Corbara, a precious ruby 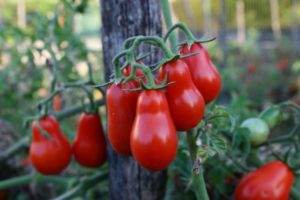 The tomato (Lycopersicon esculentum, from the family Solanaceae) is a herbaceous plant, whose origin is connected to the area of central-South America and the southern part of North America. It was introduced to Europe by the Spanish conquistadors, first of all by Herman Cortes, who in 1540, when returning home, brought with himself some specimens as an ornamental plant.
In the beginning everyone believed that it was a poisonous plant, given its high content of solanine, but not long after it has slowly found its right space in the kitchen; its fruits were recognized suitable for food consumption, becoming a vegetable and losing its role of a decorative plant.
Soon the cultivation of tomatoes has spread throughout the Mediterranean basin, finding the suitable climate for its development, especially in Italy and mainly in the southern areas of the country, from Sicily to Campania, where this plant arrived in 1596.
In Campania, specifically in the Agro Nocerino-Sarnese area between Naples and Salerno, it has found exceptionally favorable climatic conditions, so much that it was recognized as the adoptive home of the tomato. Besides, this region constitutes an important reservoir of valuable local autochthonous productions formed over the years by spontaneous hybridizations and / or mutations and subsequent selections made by the farmers. Indeed, in a small location you can identify several crops, the result of various interactions, spontaneous or mediated and among these falls the tomato Corbara or Corbarino cultivated in the homonymous city.
Corbara, a small town in Campania in the province of Salerno, has an extraordinary microclimate, it is located between the sky and the sea, on one side it turns its gaze towards the agro nocerino-sarnese and on the other side towards the sun of the Amalfi coast. Consequently, this location, thanks to its climatic uniqueness, manages to give the Corbarino tomato its particular sweet-sour taste, making it distinguishable among other tomato species.
Besides, this product was in danger of disappearing, but thanks to the strength and synergy of some farmers from Corbara and thanks to enlightened entrepreneurs, it has been recovered.
This tomato is particularly rich in vitamins and mineral salts, it is also high in healthy antioxidants, as demonstrated also by a study coordinated by the Professor Antonio Giordano. The “Pomodorino Corbarino” is therefore a herbaceous plant, its stem becomes erect in the juvenile phase and then decumbent and can reach the height of over two meters; under optimal conditions the harvest can continue until the entire month of October; some elderly people of the village remember how, in the past the tomatoes used to grow in the vineyards until the period of Christmas.
With an intense red color, with a characteristic elongated shape, this tomato represents one of the
more significant testimonies of the local rural tradition; it is particularly rich in vitamins and mineral salts and also in antioxidants.
Different biotypes are assimilated to the “Corbarino” species, selected over the years by the farmers, but they mainly all derive from old varieties cultivated in the area since the first half of the twentieth century. According to scientific sources, in the years from 1954 to 1958, several samples were collected from the area with different names depending on the geographical area of origin, all with similar but genetically identical phenotypes. Subsequently, in 1961, as part of the “First National Convention on Tomato”, professor De Cillis described the various biotypes of tomatoes grown during those times and they are today classified under the name “Ecotipo Corbarino”.
The fruits produced can be used either as a fresh consumption or for processing, but also for long storage, obtained through the ancient technique of the bunch, a technique used by the latest harvests. The fruits are in fact clustered and placed along strings, in order to form the so-called “spunzilli”, or clusters weighing 2-3 kg each, which are hung and stored in ventilated areas where they complete the maturation, kept fresh for the whole winter.

It is important to mention the type of land on which this tomato is cultivated, whose plantation is generally characterized by the typical terracing arrangement, with very deep soils, basically consisting of pyroclastic materials of volcanic origin referable to the Somma-Vesuvio complex, which represents an important natural resource, ensuring an ideal substrate for the development of vegetation.
The annual production of these fruits is about 100/350 quintals per hectare, with annual variations due to specific climatic trend. This special tomato is an essential part of the local gastronomy and characterizes the most varied preparations, giving the possibility to be used in all dishes from the appetizer to the dessert. A truly unique product that should be known and protected, and should be recognized as the excellence of the region of Campania.