The world of the Crustaceans – really loved, yet really fragile

The world of the Crustaceans – really loved, yet really fragile 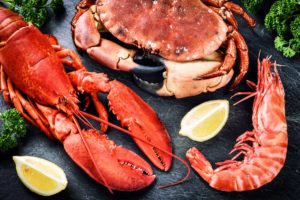 Crustaceans are among the most loved marine species in the Mediterranean Sea. There are thousands of varieties in the world and they live in different habitats – there are more than 25,000 species. In order to identify every difference between the varieties, they are distinguished by different names based on the place of belonging.
They belong to the family of Arthropods and the edible ones belong to the Decapodis group, whose name derives from the presence of ten thoracic legs, some of which can also appear transformed into pincers or claws, frontally distinguished by two pairs of appendages: the antennas and antennulae are present to respond to functions other than locomotion; the body is instead provided with a resistant shell composed of a matrix based on calcareous salts, commonly known as carapace, which in the larger crustaceans, constitutes a real shell which protects the head (capothorax) and partly the thorax (cephalothorax) ).
The crustacean is a noble food of the kitchen, which requires great care and attention in the selection and also in the processing.
The shrimp, the scampi, the lobster, the Homarus Lobster and the Mediterranean slipper lobster are all characterized by an elongated and extended abdomen and a fan-shaped cod fin; the Brachiuri (from brakus = short and oura = tail) are mainly marine, even if the Potamidae family has colonized lakes and rivers, they are characterized by a short abdomen without a fan, folded under the capotorace, such as the crab and spider crab; the Stomatopods (from stoma = mouth and pous-podos = foot) are distinguished by two buccal appendages, like the pincers, consisting of a movable toothed article that folds on the following segment, like a knife blad and in this group the mantis shrimp or cob are present.
In most cases, they live in the water and they lead an amphibious life, they live near the coasts, among the rocks or on rocky, sandy or muddy beds at various bathymetries, even if some of them like the Brachiuri, have the ability to stay dry for a limited period of time, while others sink into the soft mud on which they live.
Because of the enzymatic degradation of the amino acids and the muscle proteins, crustaceans are easily perishable; the high quantity of free amino acids and free nitrogen, associated with the enzymatic and bacterial action, determines a very limited shelf life for the crustaceans, which leads to a strong smell of ammonia and a badly preserved fish. Therefore, it is recommended to use the product you just bought, or after 24 hours; to stop this process of decay, it is necessary to proceed with cooking or freezing, which should be done as soon as possible.
Regarding the Mediterranean fishing areas, we can find different species of shrimp, such as the red shrimp, the purple shrimp, the pink shrimp and the shrimp.
It is important to mention that the crustaceans are not large predators, they eat mainly other invertebrates or plant materials and unlike other fish species, they are territorial animals and they do not swim for long distances in search of food.
Furthermore, the fishing methods used differ according to the type of crustaceans that are intended to be captured; among the most used methods, there are the traps and the nets, or some species can be bred. For the Mediterranean slipper lobsters and the lobsters the most used method is certainly the lobster pot, while for the shrimps, mantis shrimps or scampi it is particularly common to use the trawl net.
Regarding the commercialization of the product, the crustaceans are kept in tanks and they are fed with sea water in a closed type circuit with frequent checks on the microbiological and chemical quality of the water, coming from certified and authorized companies, guaranteeing the consumer the purchase of a high quality product. It is fundamental, in the phase of transport and storage of the product still alive, to carry out the appropriate checks and to maintain a cold temperature, in order to limit the possible risks of microbial proliferation and mortality of the animal due to sudden changes in temperature. Crustaceans, as well as other species require a special attention, in order to ensure the final consumer with quality and safety of the product purchased.